An order from the Postal Regulatory Commission (PRC) requires the 4.3 percent exigent surcharge to be rolled back after the Postal Service has recouped surcharges totaling $4.6 billion. As outlined in a notice filed with the PRC today, that amount is expected to be reached by April 10th.

The surcharge removal means all First-Class mail and commercial prices will be decreased, effective April 10th.

A complete listing of the new prices, effective April 10, is available at www.usps.com.

You may have read before that print advertising engages readers better than digital advertising. If you’re curious about the science behind that, I suggest reading “What Can Neuroscience Tell Us About Why Print Magazine Advertising Works?” — a white paper by Scott McDonald, Ph.D. and The Association of Magazine Media. It concludes that reading on paper is slower and deeper, benefits from less distraction, has better long-term comprehension, benefits from the sensory experience of holding paper, and actually activates the brains desirability and reward centers. 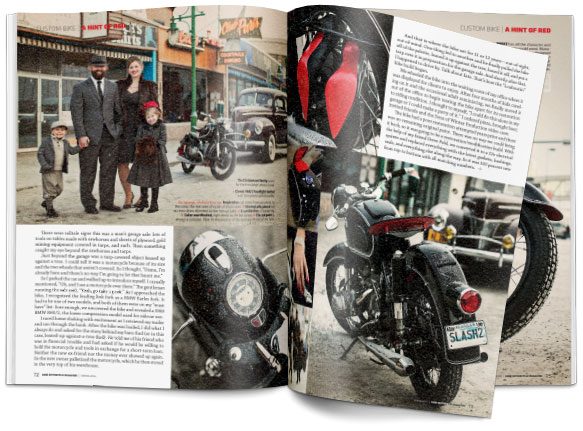 The Spring edition ofÂ BMW Motorcycle Magazine has been mailed to subscribers and you should be able to pick up a copy on newsstands within the next couple of weeks. Be sure to check out the feature article, “A Hint of Red,” which tells the tale of Erik Christensen and friends rebuilding a vintage 1968 BMW R60/2 motorcycle. Morr Art’s layout really sings here because of the fabulous photography by Relic Photographic. The “look” is due, in so small part, to the efforts of the entire Christensen family who set up the photo shoot, with vintage clothing, hair styles and cars, in the middle of an Alaskan winter. I don’t know how they convinced auto enthusiasts to bring their cars out in the snow, but the results were worth it.

Yes, the “media” part of “magazine media” was an emphasis, but there was a kind of cockiness in the air this week, based on a growing realization that magazine brands are really, really good at creating world-class content—across platforms. And aggregating audiences. And generating revenue. “Yes,” the unspoken sentiment seemed to be, “Facebook, Google, Buzzfeed and other new competitors lead in some ways, but they’re not as well rounded as we are, nor as skilled in content creation as we are, and they don’t have generations of brand loyalty working for them.”

Time Inc. CEO Joe Ripp took a swipe at the approach of many digital-only media brands when he said, “People who don’t want to write listicles and want to do serious journalism are attracted to Time Inc.”

Maria Rodale also made a reference to low-quality internet content, but more obliquely, when she said, “Consumers are willing to pay for media that’s free of bullshit.”

But Hearst’s Carey put it best. “Who would have thought that the magazine business was such a springboard to all of these other media forms,” he said, “but we’re seeing that.”