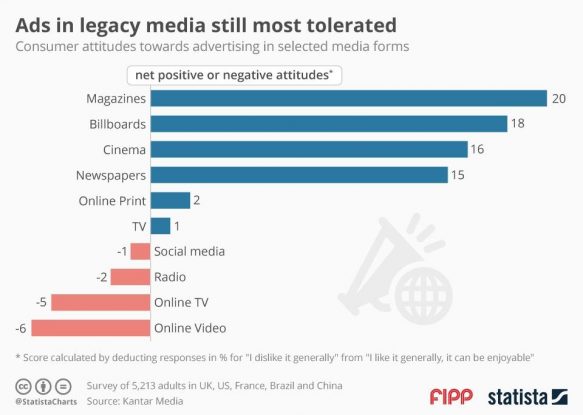 David Pilcher at FreeportPress comments on a recent survey:

Luxury brands know the score. So do big brands like Proctor & Gamble. And consumers have made their preference loud and clear with their massive adoption of ad blocking technology.

Now Kantar Research is the latest source to confirm what is becoming increasingly well-known: consumers prefer advertisements in legacy media, and especially in print magazines, and tend to dislike new digital media formats.

The longer it processed the dataset, the closer the algorithm got to making legit color names, though they were still mostly surreal: “Soreer Gray” is a kind of greenish color, and “Sane Green” is a purplish blue. When Shane cranked up “creativity” on the algorithm’s output, it gave her a violet color called “Dondarf” and a Kelly green called “Bylfgoam Glosd.” After churning through several more iterations of this process, Shane was able to get the algorithm to recognize some basic colors like red and gray, “though not reliably,” because she also gets a sky blue called “Gray Pubic” and a dark green called “Stoomy Brown.”

There’s still room for human creativity in this computerized world.

We can satisfy our reader’s cravings while they wait for a render to complete, and still give them something more substantial to inspire and enlighten at the end of a long work day. As a publisher, we believe it’s our responsibility to not just entertain but also elevate and enliven the profession’s discourse by maintaining a high standard for editorial.